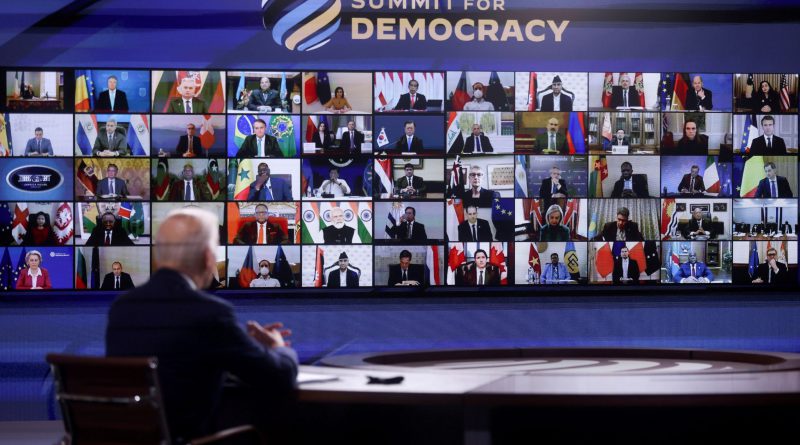 It never feels good to be excluded from a gathering of friends, and this is no different for states in the diplomatic arena. No surprise then that Singapore’s omission from the US-organized “Summit for Democracy” in early December last year was met with both chagrin and hurt feelings. Local diplomats cited the invitation of other “flawed democracies” at the summit as an exercise of double-standards.[i] The glaring omission brought back bitter memories of cool US-Singapore ties in the 1990s when Washington deemed Singapore to be insufficiently committed to human rights and democratic values.[ii]

Too much ink has already been spilled about the extent to which Singapore is a democratic polity, or if the US should pick its friends and enemies based on how they choose to organize their domestic politics. It is also not apparent that the non-invite represents a devaluation of Singapore on the part of the Biden administration, given the high-profile visit of top officials such as Secretary of Defense Lloyd Austin and Secretary of Commerce Gina Raimondo in the second half of last year.[iii] Vice-President Kamala Harris’s tour of Singapore and Vietnam in August last year may have been taken in lieu of summit attendance, given that neither state has been asked to attend.

That is just as well, given that conference attendance would have been unlikely to have been in Singapore’s national interests in any case. Even if an invitation had been extended, it would have been wise of the government to have declined it. While participation would have been a good opportunity for reinforcing US-Singapore ties and engaging in informal talks with fellow participants, it would have come at the cost of signaling a weakened commitment to key tenets of Singapore’s foreign policy.[iv]

At the heart of Singapore’s foreign policy is a commitment to non-interference in the domestic affairs of other states. As a small state, Singapore befriends and trades with all states who are willing to engage with it in good faith. By portraying itself as having no intention to influence the domestic policy of other states, Singapore can improve its security by building broad diplomatic relations across geopolitical divides. It can also maximize economic opportunities by engaging with a broader range of partners across international alignments.

By attending the democracy summit, however, Singapore risks being seen to be supporting Washington’s position on democracy promotion. The agenda of the conference is framed by the US State Department as an initiative “to defend democracy and human rights at home and abroad.”[v] The reference to “abroad” is concerning, since it implies a signal on the part of participating states to promote a particular model of political norms outside of their national borders, especially since it is a long-time foreign policy goal of the US to do just that.[vi]

To be sure, the goals that states are called upon to commit to at the summit were relatively vague, with actual commitments varying by country.[vii] Yet it is perhaps less the specific commitments than the optics of participating in an event associated with US democracy promotion that risk undermining Singapore’s non-interventionist credentials. Given that the event’s purpose—as is the case for many diplomatic events—is primarily symbolic in nature, merely attending the summit could create the impression that Singapore supports the democracy promotion agenda of the forum.

Not being invited to the summit means that Singapore has avoided antagonizing non-democratic states by signaling support for democracy promotion. “The Biden administration’s inaugural Summit for Democracy offered an opportunity to launch that cooperation and for like-minded countries to coordinate policy in response to increasingly assertive autocratic regimes. The strong response to the summit from leaders of countries that did not meet the threshold for inclusion … suggest that they view such coordination as a threat,” writes Elizabeth Hoffman, CSIS Director of Congressional and Government Affairs.[viii]

Now it may be argued that democracy is a highly subjective and loaded term that can be very broadly interpreted. Marxist-Leninist states like China and Vietnam, for instance, proclaim themselves to be democracies, albeit expressed through a political structure and ideology very different from that of Western liberal democracies. Perhaps the summit would have provided a good opportunity for Singapore to contribute its conception of being a “democracy of deeds”—that is, prioritizing ostensibly democratic outcomes over democratic procedures—to the global discourse on democratization.[ix]

But while many in the international community—including many liberal democracies—may welcome such a dialogue, the extent to which this would be possible in a US-led forum is questionable. While Washington has declared its commitment to being “as inclusive as possible,” the extent that it can be so in practice is limited by an entrenched norm of “democratic universalism” in US politics.[x] Since all states should theoretically be able to propagate a form of democracy compatible with that of the US, Washington is often unable to accept that states that seemingly “fall short” may be pursuing a different rather than a willfully antithetical political structure.

This idealism lies at the heart of US foreign policy. “As a nation ‘dedicated to a proposition,’ the United States has always believed that its political ideals and principles are in theory universally applicable. The Declaration of Independence, in Lincoln’s words, gave liberty ‘not alone to the people of this country, but hope to the world for all future time,’” writes Gideon Rose, former editor of Foreign Affairs.[xi] The relativist view that foreign, non-democratic political practices are “presumptively legitimate”, he argues, is both unusual and “profoundly un-American.”

Consequently, the extent to which argument outside of this consensus is possible will arguably be limited considering this perspective towards democracy. And given the perceived threat that democracy is facing from authoritarian populism, the Biden administration will wish to present a united front of democracies to the world, leading to an emphasis on forging consensus rather than debating points of disagreement.[xii] Within such a context, the ability for Singapore to discuss alternative models and visions of democracy is somewhat limited.

One of these perceived threats to democracy from Washington’s perspective is the rise of China. It has now become a consensus in Washington that China is an ideological threat to the US, with US politicians accusing Beijing of using its newfound influence to “make the world safe for autocracy.”[xiii] Consequently, one of the summit’s implicit goals might be to display the solidarity of the world’s democracies against Beijing’s alleged ideological threat. The conspicuous inclusion of Taiwan as a participant perhaps hints at this objective.

For some, the strategic interests at play are equally, if not more conspicuous than the ideological repercussions. “The Biden administration’s goal in organizing a Summit for Democracy or launching the Initiative isn’t simply about bolstering democracy around the world. It is about bolstering democracy to sideline a rising non-democratic country, and highlight its contrasting authoritarian ideology—China,” writes Manjari Chatterji Miller, senior fellow for India, Pakistan, and South Asia at the Council on Foreign Relations (CFR) in the Hindustan Times.[xiv]

To navigate great power tensions while maintaining strategic autonomy, a core tenet of Singapore’s strategy has traditionally been to adopt a position of non-alignment between geopolitical poles.[xv] While this strategy has so far been effective, the increasingly adversarial nature of US-China relations have increasingly put this non-aligned posture under increasing strain.[xvi] Given a growing zero-sum logic in the international system where alignment with one power may be increasingly seen by the other power as opposition to its interests, vigorously maintaining non-alignment is crucial to Singapore’s geopolitical survival.

If Singapore were to have attended the democracy forum, there is a risk that China would perceive this as an attempt to support Washington’s narrative that China’s authoritarian political norms are a threat to the international order Even if Singapore were able to eventually mollify China as it has done over previous disputes,[xvii] the partisan optics of this event may not do Singapore’s standing in Beijing any favors, given that it weakens the credibility of Singapore’s position that it does not wish to “take sides” in the US-China great power conflict.

Given these foreign policy minefields, it is no wonder that retired diplomat Bilahari Kausikan called Washington’s non-invite a “big favor” to Singapore.[xviii] While it is certainly not a boon to have one’s democratic credentials—however imperfect—implicitly questioned in this manner, it does at least allow Singapore to avoid compromising on more fundamental pillars of its foreign policy. Routine diplomatic meetings such as the UN General Assembly, ASEAN Summit, and G20 summit provide Singapore with the opportunity to cultivate closer ties with the international community without implying support for democracy promotion abroad or opposition to a particular power.

Ng Qi Siang is a MA candidate with the Regional Studies–East Asia program at Harvard University. He is also staff editor at the Singapore Policy Journal. His research interests lie in international relations and US-China rivalry in East and Southeast Asia.

[i] Justin Ong, “Singapore Left out of Summit Because US Doesn’t See It as a Democracy: Tommy Koh,” The Straits Times, December 9, 2021, https://www.straitstimes.com/singapore/politics/spore-left-out-of-democracy-summit-because-us-doesnt-see-it-as-one-tommy-koh.

[ii] In the wake of the end of the Cold War, the Clinton administration pursued a strong human rights agenda that alienated Singaporean leaders, leading to particularly difficult ties for a time with Washington. See S. Jayakumar, Diplomacy: The Singapore Experience (Singapore: Straits Times Press, 2019).

[iv] These tenets include non-interference in the internal affairs of other states, befriending all states who are willing to engage Singapore in good faith, and taking a non-aligned position between geopolitical poles within the global order.

[xiv] Manjari Chatterjee Miller, “What Was the Summit for Democracy Really About?,” Council on Foreign Relations, December 16, 2021, https://www.cfr.org/article/what-was-summit-democracy-really-about.

[xvi] Yuen-C Tham, “Not Possible for S’pore, Many Countries, to Choose between US and China, PM Lee Tells BBC,” The Straits Times, March 14, 2021, https://www.straitstimes.com/singapore/not-possible-for-spore-many-countries-to-choose-between-us-and-china-pm-lee-tells-bbc.

[xvii] Examples of incidents of friction between Singapore and China include Singapore’s decision to conduct military training in Taiwan and the confiscation of its Terrex Armoured Fighting Vehicles in a Hong Kong port.

[xviii] Justin Ong, “Singapore Left out of Summit Because US Doesn’t See It as a Democracy: Tommy Koh,” The Straits Times, December 9, 2021, https://www.straitstimes.com/singapore/politics/spore-left-out-of-democracy-summit-because-us-doesnt-see-it-as-one-tommy-koh.