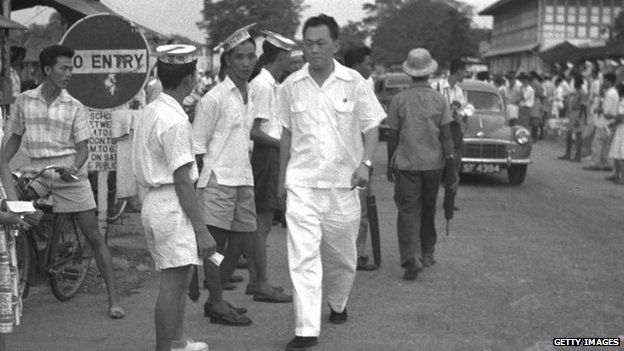 Government Administration Op-Ed Our Divided City Social Capital Who are we?
October 7, 2019

“We are pragmatists. We don’t stick to any ideology. Does it work? Let’s try it and if it does work, fine, let’s continue it. If it doesn’t work, toss it out, try another one. We are not enamoured with any ideology.”– Lee Kuan Yew (2007), in an interview with the New York Times

Since our independence, the People’s Action Party (PAP) has never wavered in its narrative that Singapore is a small, vulnerable city-state. Our story, the argument goes, is that of the little engine that could: despite our hostile neighbours, unstable regional environment, absence of a hinterland, and a heterogenous national population, Singapore has succeeded because of the PAP’s single-minded pragmatism. Rather than obsess about “highfalutin ideas” (Lee, 2009), the PAP focused on ‘realistic’ policies such as the provision of low-cost public housing, implementing national conscription, and attracting foreign capital to Singapore.

As the PAP has governed Singapore without pause since 1965, it comes as no surprise that its doctrine of pragmatism has filtered down to the civil service. In an article on the Civil Service College online portal, the authors champion “unsentimental pragmatism” and a “pragmatic focus on results” as fundamental for Singapore’s governance success. This is, to be clear, not in itself a problem. It is good for the civil service to be comprised of competent and fact-sensitive professionals who assist our elected leaders in implementing their agenda. The PAP, too, has good reason to emphasise the importance of pragmatism: from its subjective perspective, there is no need to change a proven formula for success.

Singaporeans, however, should be more critical of this narrative. This does not mean rejecting pragmatism; rather, it means recognising that pragmatism and moral idealism need not stand in opposition to each other. Before proceeding further, it is important to define pragmatism and idealism in the context of politics. The pragmatist believes that ‘good outcomes’ in politics are self-evident. These outcomes tend to be defined in quantifiable or utilitarian terms: for instance, median wage growth or access to public housing. Because it is ‘obvious’ what governments should target, political discussions should focus on how to achieve these goals within current constraints. The idealist, in contrast, questions the status quo and imagines the world as it should be. By freeing themselves from concerns about what is feasible, idealists gain clarity about their value-priorities – and often end up disagreeing with pragmatists as to what should constitute ‘good outcomes’. For instance, an idealist might argue that social cohesion and mutual tolerance should not be purchased at the cost of institutionalised discrimination against vulnerable groups because, in an ideal world, people should not be discriminated against.

Pragmatism without principle is directionless and inert. It is impossible to govern on pragmatism alone – there needs to be some ideal, or set of values, the government is optimising for. This is where the importance of idealism, and utopian thinking in general, comes in. Today, we face new challenges in the form of climate change and calls to preserve, rather than re-develop, our national heritage. We also face old challenges that have gained greater prominence due to a changing socio-political landscape, such as rising inequality, both between and within states, and the push for LGBTQ rights. In finding solutions to these problems, the first step is to articulate what our value-priorities are. The best means of doing so, I argue, is to imagine a more perfect Singapore, free from the constraints of what is feasible. This helps us, as voters and participants in civil society, clarify our moral intuitions and focus on what matters.

It is tempting to believe that the cynic is, somehow, more intelligent than the dreamer. But in truth, pragmatism is no smarter than idealism. The former helps us to orientate and prioritise our values, and the latter gives us an actionable roadmap to actualise these principles. Both modes of thinking are required for effective governance. Take climate change for example. A common criticism levelled at the recently-concluded SG Climate Rally is that their proposals, such as encouraging Singaporean investors to divest from fossil fuel-based companies and reach net zero carbon emissions by 2050, are ‘unrealistic’ or ‘naïve’. This misses the point. These recommendations do not assume ease of implementation. Rather, the intention is to imagine a Singapore in which full climate justice is achieved. The fact that this utopia cannot, or may not, be achieved is part of the argument, because it forces us to question our current value-orientations: do our current economic and political systems over-prioritise the interests of pollutive corporations and investors at the cost of the natural environment and future generations? It also sends a clear signal to the government that a significant number of Singaporeans care about the environmentfor its own sakerather than a means to an end, and therefore demand a sharp reduction in emissions alongside efforts at mitigation.

Idealism, and the efforts of idealists, performs an essential signalling function: a government cannot dream on behalf of its people. In the absence of a compelling counter-vision, or alternative values, it will continue to trundle along a well-worn path, institutionalising ‘default’ value-priorities which, over time, come to dominate public discourse and decision-making. This is crucial, because interactions between the government and pragmatists tend to reinforce the current state of affairs. To move the needle and encourage social progress, Singapore needs idealists to stand up and interrogate the status quo.

Following on from this, most political proposals are not in themselves feasible or infeasible. For one, social conditions change over time. An African-American candidate running for, and then winning the office of, the President of the United States was a political non-starter a few decades ago. America needed idealists – leading figures in the civil rights movement, tireless campaigners, and a talented dreamer named Barack Obama – to shatter this presumption. For another, changes in technology and economic circumstances can popularise previously-unviable policies. The concept of a Universal Basic Income (UBI), for example, was discussed centuries ago in Utopia(1516) by Sir Thomas More. In the years since, UBI has been dismissed as impractical and unnecessary. In recent years, though, with the dual trends of automation and increasing returns to capital over labour, UBI has re-entered the political consciousness. In countries such as Switzerland, Canada, and Finland, local organisations and governments have even experimented with UBI on a sub-national scale.

I recognise, however, that encouraging Singaporeans to chase their idealistic pursuits could lead to conflict between interest groups. Moral intuitions are not shared and can come into direct opposition – one person’s dream of equal rights for LGBTQ individualscould well be another’s religious nightmare. Two responses will be discussed. First, this strengthens the case for a liberal, non-interventionist government that allows different groups of Singaporeans to chase their differing conceptions of the good. Just as the government should not ban a pastor from preaching that pre-marital sex and homosexual relationships are a sin, it should also not enforce this ideal on LGBTQ individuals or Singapore who do want to have sex before marriage. This is, once again, a good example of idealism and pragmatism interacting to produce reasonable outcomes: a liberal campaigner at Pink Dot might imagine an ideal world where all religions embraced the LGBTQ rights movement. The pragmatic legislator, however, recognises that this is not an achievable world. But, if the campaigner can organise rallies, write opinion-editorials in the national broadsheet, and is given government funding to set up a social advocacy group or charitable cause, then, over time, it becomes easier for the legislator to push for change.

Second, the electorate will find some moral intuitions to just be prima facieless compelling than others. If we, as a Singaporean community, were more receptive to moral claims, it would become easier to call out self-serving and unethical arguments that its proponents assert is the ‘hard, pragmatic truth’. An example from the United Kingdom, where I study, best illustrates this point. Last month, the Labour Party proposed a ban on private schools. In the British context, private schools like Eton College and Westminster School command a significant premium in terms of school fees. Well-off parents send their children to these schools, which offer a world-class education, and in turn, their children are given a leg-up when applying to top universities. From a pragmatic perspective, there are serious problems with Labour’s proposal. For one, it may not win votes at the ballot box. And, for another, private schools may launch a legal challenge if a Labour government were to redistribute their assets. Pragmatic issues aside, however, Labour’s suggestion is an important one. From the perspective of moral idealism, it has encouraged Britons to ask themselves: in an ideal world, should private schools exist? The answer, I suspect, is no. In an ideal world, educational excellence should not be locked behind an expensive paywall. It is hard, if not impossible, to argue that the current British system is moral. Again, here is where idealism and pragmatism complement each other. Given that we live in a non-ideal world, perhaps it will be difficult to abolish private schools. But Labour’s recommendation, borne out of its idealism, highlights the ethical problems of the British education system. Leveraging on this political momentum, the pragmatist might propose, for instance, enforcing a scholarship quota such that a significant percentage of private school enrolment is reserved for subsidised, underprivileged students.

In sum, Singaporeans – myself included – should tamp down our instinctive cynicism and try being idealistic for a change. The purpose of this article is to encourage metacognition: it is important to unlearn some of our default paradigms. Time and again, our leaders have drilled home the importance of being pragmatic. Lee Kuan Yew’s response to a New York Times interviewer, when he was asked to explain Singapore’s position on refusing permanent entry to Vietnamese refugees, comes to mind.  “You’ve got to grow calluses on your heart, or you just bleed to death”, he lectured.

There is some truth to this sentiment. Singapore cannot help everyone – no one can. But if the Singaporean heart is callused and grey, beating only when convenient and silent in the face of injustice, can we be surprised when some of our people see this island as a hotel and not a home? Home, after all, is where the heart is.

Lee Chin Wee is a finalist (third-year) reading Philosophy, Politics, and Economics at the University of Oxford.