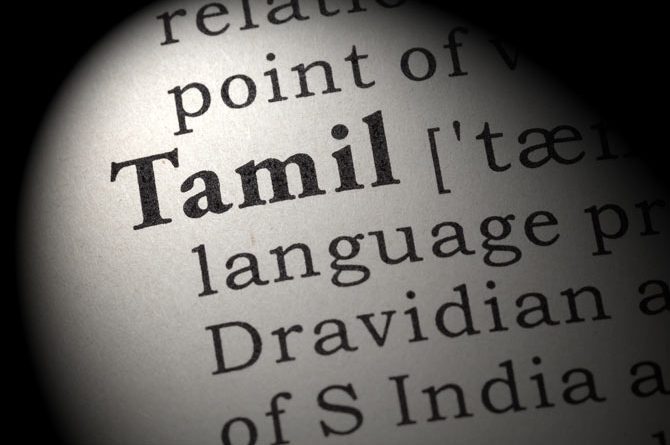 I was heartened that the ancient Tamil word Aram (roughly translated as “Doing what is right and acting with consideration”) was chosen as the theme for the 2017 Singapore Writers Festival. All Tamil speakers in Singapore can identify with the term: the first Aathichudi (akin to a proverb) we learnt in school was Aram Seya Virumbu (“Have desire to do good”).

The Festival also partnered with Tamil Murasu to organise story-telling sessions featuring traditional art forms like Therukoothu (Street Theatre) and Villupaatu (Song of the Bow). As evident from posts on social media, members of the Tamil community enjoyed the showcase of Tamil art forms and selection of “Aram” as the Festival theme.

This was a timely fillip for the status of the language in Singapore. Over the past few years, translation errors in official materials, despite recommendations from a Review Panel on Government Tamil Translation, have caused some unhappiness in the Tamil community. Indeed, over the past decade, the rise of English usage at home and proliferation of non-Tamil Indian languages have raised questions about the language’s relevance in today’s Singapore.

The declining usage of Tamil in Singapore

Indians form about 9% of Singapore’s resident population, with Tamils forming the majority (nearly 55%) and Malayalees, the next highest group with 7%. Other sub-ethnic groups from South, North and East India form the rest of the Indian population in Singapore. Tamil is spoken by about 189,000 residents (Department of Statistics, Singapore 2010).

The Government is committed to maintaining Tamil as one of the official languages, taking active efforts to promote its usage. For instance, the Tamil Language Council organises the month-long Tamil Language Festival (Thamizh Mozhi Vizha) every year since 2006, which has grown rapidly. The 11th Festival in 2017 presented more than 50 programmes by 45 partners.

Committed individuals and organisations have also complemented top-down initiatives to improve the state of the language in Singapore. For example, as part of SG50, a volunteer group, called the Tamil Digital Heritage Group, collaborated with Tamil authors and the National Library Board to digitally archive 50 years of Singaporean Tamil writing.

Nevertheless, there are concerns, especially among older generation Tamils that the younger generation does not speak in Tamil at home. This lament is echoed by Tamil teachers who have observed a falling standard of spoken and written Tamil. The numbers validate this anxiety. The proportion of Indians speaking Tamil at home had decreased from 42.9% to only 38.8%. English is now the language that most Indians are comfortable conversing in (Department of Statistics, Singapore 2015). It is common to hear parents asking, “How is Tamil going to help in my child’s professional career?”

Yet, Tamil’s importance in Singapore goes beyond economic calculations. Being proficient in Tamil is a cultural marker. As former Prime Minister Lee Kuan Yew said in his 1978 National Day Rally speech, “a…person who gets deculturalised…loses his self-confidence…(and) suffers a sense of deprivation”.

Therefore, the first step to strengthen Tamil’s position in Singapore is to inculcate a lifelong love for the language and an appreciation of its cultural norms amongst students. It is also imperative to increase public awareness about Tamil’s position as an official language amongst non-Indians. Finally, prominent and successful members of the community must speak the language to raise its profile.

1. Inculcating a lifelong appreciation for the language

The Tamil community must target efforts to create novel platforms that will engage students, especially those from non-Tamil speaking home environments. For example, it could be made compulsory for all Tamil students in schools to attend at least one arts education programme during their Primary and Secondary school years. Currently, this is up to the discretion of teachers and it is important to institutionalise these practices. Akin to the National Arts Council-Arts Education Programme model, this programme could either be a classroom showcase (Arts Exposure), an excursion to a Tamil cultural show (Arts Excursion), or a hands-on learning experience of an art form (Arts Experience). The Tamil Language Festival in April provides an opportunity to achieve this goal. Organisers can share a preliminary programme with schools for advance planning, and arrange more programmes within school premises or in heartland Community Clubs.

Many Tamil community organisations outside schools involve students by organising oratorical, story-telling, poetry recital or singing competitions, and should introduce new competitive formats to promote participation from students who might not be confident enough to present speeches in literary Tamil. We can refer to Shabir Tabare Alam, composer of Singai Naadu, the 2012 National Day Parade Tamil song and 2017 Singapore Youth Award winner, as an exemplar. In 2013, he organised Edhugai (A literary device used in poems), a song writing contest for secondary school students. As he said, “it was time to discover more voices, ideas and messages…from today’s youth and…increase their interest in the language”. Since the objective was to write songs, students of varying linguistic and musical capabilities worked in teams to create original works. Such initiatives will also incentivise teachers to involve weaker students in competitions. Even parents who do not speak Tamil at home will be encouraged to follow their children’s progress in such contests.

2. Deepening public understanding of Tamil (and other official languages)

In Singapore’s multi-racial context, maintaining Tamil depends on other races having a better understanding of the language’s role in our history and present society. The Bicentennial Commemoration in 2019 presents an opportunity to enhance public awareness about the Tamil community’s contributions to Singapore.

All Singaporean students should also be given the chance to learn the basics of all official languages in Singapore for one term during National Education lessons. Most Malay and Indian students know how to count from one to 10 or greet someone in Mandarin purely by virtue of having many Chinese classmates. Exposure to Malay and Tamil is similarly confined to singing the National Anthem and Munneru Vaaliba respectively. Students should learn to hold a basic conversation, recite the Pledge in other official languages and understand more about the cultural values that are inextricably intertwined with a language.

Tamil community organisations should also seek to organise bilingual events that will increase participation within the Tamil community and from outside it. There might be a concern that bilingualism erodes the linguistic purity of the language. However, such puritanism will only entrench perceptions that participation in Tamil community events is confined to those who are enthusiastic about the language. Furthermore, bilingual events can serve the broader purpose of building cross-cultural understanding between races. For example, English translations of literary works written by prominent Singaporean Tamils like KTM Iqbal, Cultural Medallion Winner in 2014, should be actively promoted and publicised. Widening readership will not only provide an opportunity for Singaporeans of all races to read works written in other official languages, but also ensconce Tamil’s position as an official language worth maintaining in the collective consciousness of many more Singaporeans.

The perception of any language is tied to the socio-economic profile of the people speaking it. Some perceive that Tamil is predominantly spoken by those who are unskilled or belong to the low-income category. This is a misguided perception originating from the colonial era when Tamil was perceived to be a “coolie language” (Schiffman 2003, 106). These views – acceptable or not – can only be gradually erased if the Tamil community produces effectively bilingual role models excelling in multi-racial, multi-national environments in both public and private sectors.

The salutary effect of political office holders, senior civil servants and private sector leaders speaking the language confidently cannot be underestimated. Mr K. Shanmugam, Minister for Home Affairs and Law is one such positive example. For many Singaporean Tamils including myself, it was always encouraging to see him speak at the annual opening of the United Nations General Assembly during his stint as the Foreign Minister and return home to converse in Tamil during community events. Similarly, Mr S Iswaran, Minister for Trade and Industry (Industry) and Mr Vikram Nair, Member of Parliament for Sembawang GRC have also profiled the language on various occasions by speaking it on public platforms. This practice should continue as it has the potential to inspire future generations of Singaporean Tamils to overcome their reticence to speak the language.

For such role models to develop in the long-run, the onus is also on Singaporean Tamil students to aim high, strive for academic excellence in landmark examinations and take on leadership positions from young. Successful members of the community also have the responsibility to pay it forward as mentors.

These recommendations are not panaceas. They are first steps towards tackling the multi-faceted challenges the Tamil language faces in Singapore.

While confronting these roadblocks, the community might unknowingly become insecure of its position and insular in its outlook. It is important that Singaporean Tamils remain proud of their language without succumbing to linguistic chauvinism. The growth of non-Tamil Indian languages in Singapore, whether it is Hindi or Gujarati, has added a unique flavour to Singapore’s multi-lingual tapestry. As members of the largest Indian sub-ethnic group in Singapore, it falls to us to be inclusive and accommodating. Having an open mind can only strengthen Tamil’s position in Singapore.

A Tamil translation of this piece is forthcoming.