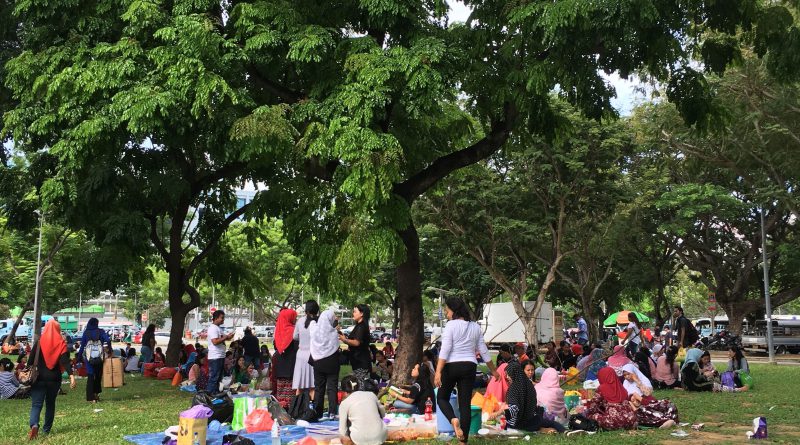 In December 2013, Singapore witnessed a calamitous night of riots in the public spaces of Little India. The usual order and safety of the public realm was shaken as hundreds of male South Asian migrant workers took to the streets in violent protest. The incident brought to light the poor quality of life that many migrants face in one of the world’s wealthiest nations, both in their private quarters but also in public spaces. It simultaneously raised anti-foreigner sentiment amongst Singaporeans, a growing number of whom are uncomfortable with how visible these individuals are becoming in public spaces in the city. But making migrant workers invisible is not feasible, given their importance to the national economy; and more importantly, it is not ethical. Can we, then, find ways to improve their quality of life, as well as integrate them better into the national fabric? One answer lies in the urban planning process for public spaces.

Low-skilled migrant workers who are in Singapore on temporary work permits are easily identifiable because they tend to congregate in specific public spaces around the city. Filipina live-in domestic workers, for instance, frequent Lucky Plaza and other shopping malls around Orchard Road on their rest-days and weekends, while South Asian migrant workers often gather at Little India to socialize. This has given rise to the notion that migrant workers tend to be isolated to certain parts of the city on their days off, bringing to light the issue of inequity in the use of Singapore’s public spaces. Hence the question: ‘Are public spaces in Singapore really democratic?’ That is, do they cultivate tolerance, encourage convergence, allow critical debate, and increase mutual acceptance? This question is not merely academic: with over one-fifth of individuals in Singapore holding a temporary work permit of some sort, democratizing our public spaces could help better integrate them into Singaporean society, and increase their quality of life.

It is urgent, then, that policymakers democratize the planning and design of public space to cater not only to the interests and needs of Singaporean citizens and permanent residents, but also to the ever-growing population of transient workers in our city. In practice, this might include holding multi-lingual planning and design stakeholder meetings, including in the native languages of migrant workers, or jointly producing public art programs with grassroots migrant organizations.

Public Space: Why Is It Important?

To begin with, why is public space so significant to migrant workers? Male employees in construction and manufacturing often live in dormitories known for overcrowding and unsanitary conditions. On average, 12 men are housed in dormitory rooms measuring no more than 25 square meters, which is substantially below internationally-recognized floor area minimum standards for developed countries, according to the UN Population Division. Female employees performing domestic duties are generally required to reside in their employers’ homes, which can significantly curtail their day-to-day freedoms because such arrangements blur the boundaries between their labor and leisure. Public spaces therefore need to be able to offer migrant workers a place to converge and engage in a multitude of social activities unmediated. Such unmediated interaction would be free of unwarranted or biased restrictions, whether discreet or indiscreet, and would mean the migrant workers could use the space comfortably, whether individually or in groups.

However, for public spaces to be able to offer truly unmediated interactions, they need to be democratic. As stated above, democratic public spaces are places that cultivate tolerance, encourage convergence, allow critical debate, and increase mutual acceptance. The democratic public space checklist is centered around concepts uncovered in a literature review on theories of democracy from philosophers like Habermas. A ‘democracy’ checklist can be used to assess the extent to which these public spaces are truly democratic – each criterion is checked against by one or more points of social observation, on-site intercept survey finding, or statute. Inspired by Sherry Arnstein’s ladder of citizen participation, the checklist is categorized by various tiers of democracy – progressively advancing to higher orders of democratic pursuit.

This checklist was used to evaluate the level of democracy of public spaces adjacent to Dunlop Street and Tanjong Katong Complex. Both sites showed a good mix of activities being engaged in by big groups of users, with high levels of safety and comfort amongst users. These indicate that a level of unmediated interaction (Criterion A) and absence of coercion (Criterion B) have been reached in both Dunlop Street and Tanjong Katong Complex. However, placement of prominent surveillance cameras by the police constrains one’s ability to engage in discourse to check powers within both public spaces. Strict regulations under the Public Order Act1 necessarily exclude any activity that checks power from occurring in the spaces – Criteria C and H “Allows for discourse to check power” and “Allows for critical debate to seek consensus and mutual enjoyment” are thus not met. Isolation of nationalities within each public space resembling Michael J White’s ethnic succession theory shows a lack of diversity in users that prevents any engagement of a wide variety of cultural practices (Criterion D) in these public spaces.

Implications: How can we improve?

While some aspects of our public spaces are commendable, my results show we cannot rest on our laurels. There is a clear need to democratize our public spaces, and I propose several means by which this can be achieved, borrowing Professor Jeffrey Hou’s suggestion of democratizing the planning process in order to create democratic space. First, Singapore could create a citywide plan for social and intercultural coexistence in public spaces to promote intercultural knowledge between migrant worker populations and Singaporeans. Second, public spaces can be used to celebrate traditional cultural events and host intercultural public meetings, and even hold integration workshops in public spaces that would engage both local Singaporeans and migrant workers to participate in activities that evaluate the city’s existing conditions – not unlike the Knowing Singapore Program organized by Migrant Workers Center. Third, public spaces can host Public Art Programs jointly produced by grassroots migrant organizations and government-linked organizations such as the National Arts Council and URA’s Place Management Department. Finally, Singapore can hold multi-lingual public planning meetings and design charrettes that include native languages of migrant workers such as Hindi, Bahasa Indonesia, Bengali, or Tagalog.

As a small-city state with limited land, space was, is, and will continue to be relevant to Singapore. Yet, not enough public attention has been directed towards understanding how social dynamics interact with our use of space to promote or reinforce specific inequities. As the Singapore government seeks to find new ways to integrate various populations into our diverse makeup, perhaps space could offer a new avenue of potential solutions to address emerging fault lines in our social fabric.

Nur Atiqa Asri recently completed an MSc in City and Regional Planning at the Pratt Institute’s School of Architecture and is an Associate at Larisa Ortiz Associates in New York. Her full thesis “Making Space for Democracy: A study of the use of public spaces by migrant workers in Singapore” can be found here.