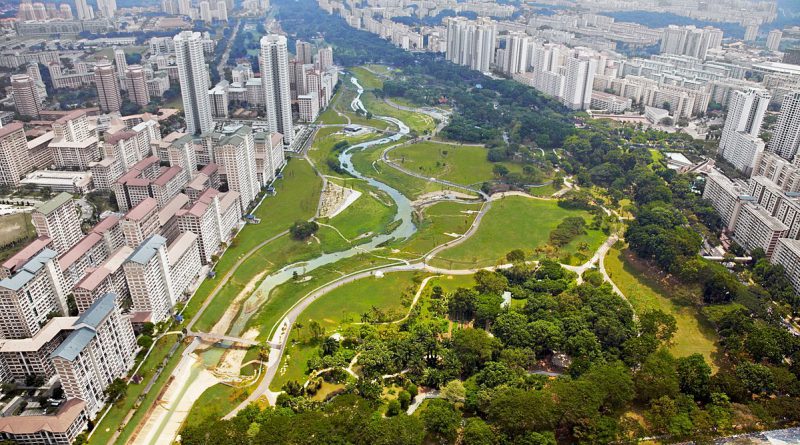 The latest MRT tunnel flooding incident in Singapore has made the threat of climate-related natural hazards real. We are not alone – from devastating floods in cities such as Bangkok and Jakarta to recent hurricanes in Puerto Rico and Florida – governments worldwide are turning their attention to building the climate resilience of cities.

What is climate resilience? It is the ability of a city to withstand extreme weather events and continue to thrive, even in the face of climate change. More broadly, resilience is the capacity of individuals, communities, institutions, businesses, and systems within a city to survive, adapt, and grow, no matter what kinds of chronic stresses and acute shocks they experience (according to The Rockefeller Foundation’s 100 Resilient Cities Network).[1]

Singapore’s climate resilience is relatively robust when compared against three key metrics: physical infrastructure, government institutions and communities.[2] After all, Singapore’s National Climate Change Secretariat (NCCS) has a Resilience Framework as part of its Climate Action Plan in 2016. Yet, our resilience policy can be made even stronger if the government strengthens citizen participation and builds social capital. 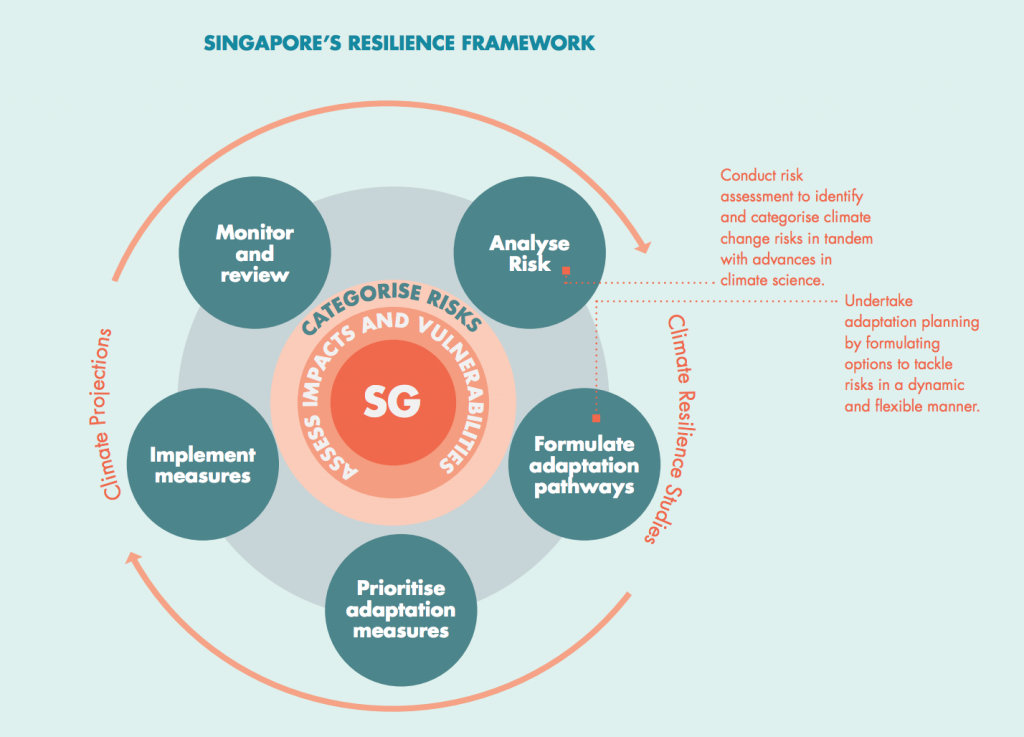 Despite its small land area and lack of natural resources, Singapore has established a strong infrastructural capacity for adapting to climate change. For instance, Singapore adopts a “Source-Pathway-Receptor” approach to dealing with the accumulation of floodwater, looking at where the water comes from (source), how and where it travels (pathway), and its destination (receptor). For instance, we might mitigate flooding by widening canals, drains, and other critical pathways.

The recent MRT flooding incident might put into question the resilience of our physical infrastructure. Figure 2 below shows the system failure that resulted in the flooding incident. Yet, investigations revealed that the flood was not caused by lacking infrastructure or the inability of existing infrastructure to deal with the amount of rainfall. Instead, the problem was negligence in regular quarterly maintenance works. We must thus turn our attention to  institutional issues. 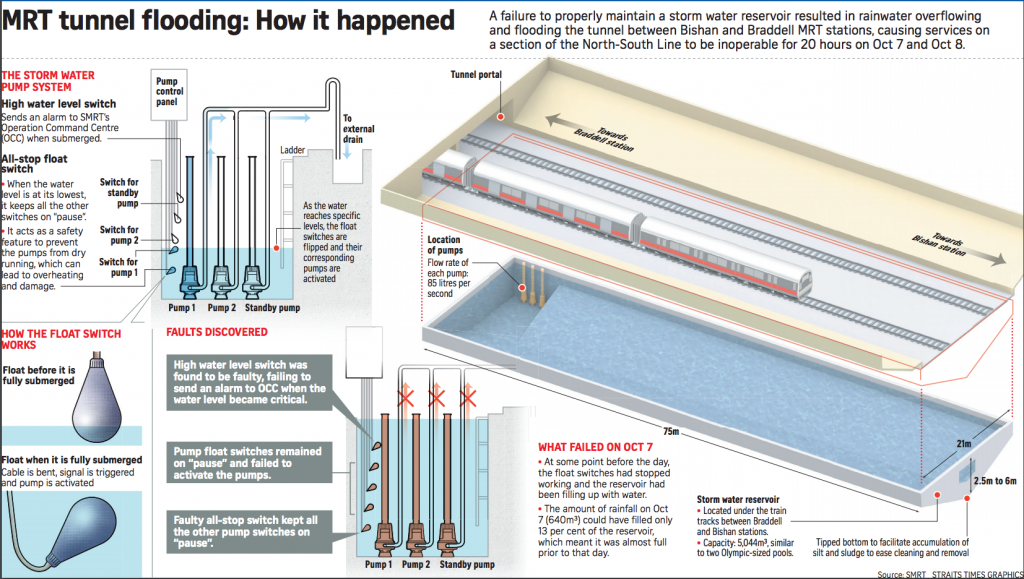 Indeed, SMRT has been criticised for declaring that maintenance had been properly conducted when it had not been since 2016. Nevertheless, the fact that the government could actively call a Parliamentary session after evaluating the best possible avenues of action displays a certain level of efficacy. It also demonstrates an ability to identify remedies so that the same mistake is hopefully not repeated. Within a month, there were inquiries, suspensions and multiple public statements on the issue.

Singapore’s institutional strength is also in its “Whole-of-Government” approach, where resilience is dealt with holistically. For instance, our flood management infrastructure is managed by the Public Utilities Board (PUB), but also takes on board the interests and needs of the Urban Redevelopment Authority, Building & Construction Authority, Land Transport Authority, Housing & Development Board and JTC Corporation.[3]

Nonetheless, there is still room for improvement. Instead of being crushed by public setbacks, the government has the opportunity to introspectively review its institutional shortcomings, and thereafter propose measures to remedy these failures. One potential avenue is through community participation in building resilience.

Specifically, PUB’s policies do not actively feature the role of communities even though its Resilience Framework refers to communities and the potential for social adaptation (a measure of whether communities can grow collectively from an adverse event). PUB has an option on their website for Qualified Persons (QPs) to apply for consultation on their projects, but since most people are not flood management experts, this is only a limited form of participation.

This is important as citizen participation in city resilience initiatives has been shown to strengthen social adaptation. Pritzker Prize winner Alejandro Aravena engaged with residents of Constitución in Chile when reconstructing an earthquake and tsunami-hit town. He encouraged community input while negotiating with Arauco, a large forestry company, allowing unanticipated issues to emerge.[4] For instance, some locals indicated that flooding was a more pressing issue than a once-in-a-lifetime tsunami, which Aravena admitted that he had not recognized. Eventually, a forest was built as a buffer to dissipate the impact of future floods and increase the availability of public space in a dense city.

In addition to citizen participation, we need to build social capital to strengthen social adaptation. Not only does social capital bring together people from similar backgrounds, but it also connects individuals from different ethnic backgrounds, and provides citizens access to policy makers.[5] This matters for resilience because social capital builds trust among different communities, allowing them to be more dependent upon each other and provide mutual support should a disaster strike.

What do I mean by building social capital? We can look to design public spaces in a way that integrates flood management strategies, using PUB’s data on flood-prone zones, but in a way that also considers the needs of local residents. Similar to the Active, Beautiful and Clean Waters programme, flood management systems need not be unsightly or hidden away like concrete longkangs,[6] but could be integrated into the urban landscape. For example, residents living in flood-prone neighbourhoods such as Paya Lebar and Upper Thomson could be given the opportunity to design a public park that would also serve as a flood buffer zone. Residents would be directly involved in community- and climate-resilience building, which would in turn strengthen social capital.

With the ever-present threat of torrential rain and rising sea levels as an obvious threat to Singapore, Singapore must continue to critically evaluate how well it is developing and implementing climate resilience plans. In particular, we need to work on getting residents involved in these planning activities too, because this is a critical part of building climate resilience through strengthened community cohesion and social adaptation.

Al Lim is an Urban Studies major at Yale-NUS College.

Aldrich, Daniel. 2017. “The Importance of Social Capital in Building Community Resilience.” In Rethinking Resilience, Adaptation, and Transformation in a Time of Change, edited by Wanglin Yan and Will Galloway. Springer International Publishing.

[2] This framework is borrowed from Sovacool et al.’s (2012) adaptation infrastructures.

[6] This refers to a drain, usually built with concrete. It comes from the Bahasa Melayu word for “drain” and is widely used in Singaporean English.