Home > Immigration > A History Worth Remembering: Forced Labour and National Identity in Singapore 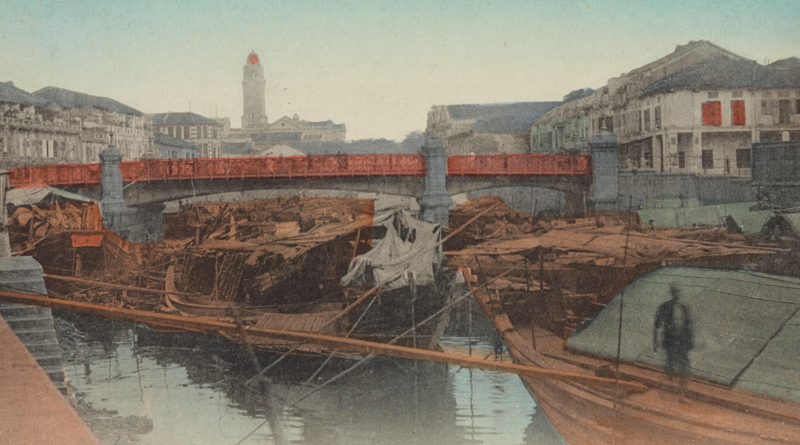 “Until very recently Singapore’s past was a matter of supreme indifference for most Singaporeans simply because they believed this island never really had a history worth remembering…” – S. Rajaratnam, ‘The Uses and Abuses of the Past’, 1984.

A quick Google search for “slavery in Singapore” returns references to “Modern-day Slavery”, as many have termed the conditions of foreign, and especially domestic helper, workers in Singapore. Some connect the abuse of these workers on their journeys to Singapore to the prevalence of human trafficking in the region; others focus on the ways in which they are ‘marketed’ as commodities. After one couple’s extreme treatment of their domestic helper came to light this year, the national broadsheet noted a rise in the number of such cases being brought before the State Courts, and greater emphasis has been placed on improving domestic helpers’ work conditions.

The majority of these reports, sympathetic or otherwise, include comments on the foreign status of Singapore’s low-wage labourers, or highlight their places of origin. This trend reflects that we view low-wage labour in Singapore predominantly through a prism of foreignness. Perhaps unsurprisingly, commentators have pointed out that Singapore’s labourers, especially in the domestic helper and construction sectors, face insurmountable barriers to becoming part of our national community.

“We recognize that we need them”, writes journalist Kirsten Han, “but only want them as long as they are of use to us”. Work permit holders need official permission before they can marry a Singaporean, let alone apply for residency or citizenship. Though the government has advocated the protection of foreign workers, one is hard-pressed to find champions among the powerful for their inclusion. At the opening of a purpose-built foreign worker dormitory in 2009, the Manpower Minister spoke at length against employers who “denied workers a basic standard of living”. Rather than encouraging their social acceptance, however, he outlined an approach of accommodation and assimilation. Information on “Singapore’s social norms” would be included in the workers’ pre-employment training, and his Ministry would support such dormitories to “better manage” the workers’ presence in Singapore.

The development of dormitories as secure, segregated communities, and top-down attempts to ‘socialize’ low-wage workers into ‘Singaporean behaviour’, indicates a conception of them as fundamentally, uncomfortably ‘other’. In the same vein, incumbent Prime Minister Lee Hsien Loong noted at his National Day Rally in 2015 that foreign workers would make “workplaces feel foreign”, and “dilute…our identity”. Take in too many, and our society would “come undone”.

I think the same, important reason underlies why we remain largely ignorant to the presence of forced labour in Singapore, and hesitate to imagine unjustly-paid and -treated low-wage workers as part of our society: the image of forced or indentured labour does not fit with how we see ourselves. We think of Singapore as a city of seafaring entrepreneurs, descendants of immigrants “seeking a better life”. Where these immigrants took up menial occupations, they did so to support “family back home”, and soon struck out on their own: setting up charities, businesses, and schools. More often, we remember them for ‘leadership’ or ‘entrepreneurship’: qualities which, uniquely among post-colonial states, Singaporeans often model on Stamford Raffles himself.

Such ideas of ourselves are informed by those who present the ‘Singapore Story’ in various contexts, including museums, libraries, tourist attractions, and newspapers. Selected scenes are turned into TV serials, printed in Mother Tongue resources, and enacted at National Day Parades. Most importantly, though, our understanding of history is shaped by the way it is taught in our classrooms.

By and large, our textbooks present a history in which indentured labourers are conspicuous by their absence. In the first state-authored textbook of 1984, Singapore is populated in “olden times” by “Malay chiefs”, “Chinese settlers”, and a community of “local people”, some of whom are identified as “Orang Laut”. After the British arrived, we are told, Singapore became a “busy town full of new settlers”, with trade worth $8 million – “a high value for such a young settlement”. The subsequent narrative focuses on early settlers including “Indian traders”, “rich Arab merchants”, and Chinese businessmen such as Tan Che Siang. Singapore thrives because it is a “Free Trade Centre”, riding on the ingenuity and enterprise of “traders and shippers” under benevolent colonial governance.

Later textbooks keep to this narrative. In 1994, a teachers’ guide for Social Studies notes the presence of “labourers” under the “occupational clusters” of various ethnic groups, but focuses on trade (which has its own chapter) and commerce under the “contributions of the pioneers”. The History Resource of 1996 has a section on the “Development of Tin and Rubber Industries” with no indication of who worked these mines and plantations, while the 1997 textbook – Singapore History Comes Alive – suggests a neat framework where the Chinese worked as middlemen and merchants, Malays worked in trade and education, while Indians worked in banking, business, and the police.

This is the account we’re familiar with. It’s a comforting, aspirational one in which everyone has their willing part in a prosperous society. Many of us, I imagine, would be shocked to visit Singapore in the 1930s, as British MP Edith Picton-Turbervill was when she found that “every Chinese household that could afford to had a mui tsai”. The term was used to describe girls between six and thirteen who were sold into domestic servitude before being married off as concubines after puberty. Despite strict prohibitions, contemporary accounts of colonial Singapore reflect the continued use of forced labour at home, on plantations, in construction, and public projects up to the Second World War.

The whitewashing of slavery from our history is not recent. The prominent Dutch scholar Christian Snouck Hurgronje provoked outrage among the British elite in 1891 when he exposed Singapore as a place of slavery and prostitution. Today, scholars have confirmed the existence of a “multi-million dollar network” linking villages in China and Japan with Singapore’s docks and brothels. From the first days of British rule, Bugis ships arrived with slaves captured across the Indonesian archipelago, whom they re-sold and “sent as presents” to city authorities. The evidence suggests that the practice of slavery had a long history in the region, and merely continued as usual into the colonial period.

Just as Singapore would not be the country we know today without its traders and merchants, it would be a very different place without the forced labourers who built our first roads, worked on plantations, or served the families of those traders and merchants for a pittance, or for nothing at all. By removing them from our history – or celebrating them selectively, as with the smiling portrayals of samsui women at the National Day Parade last year – we’ve set a powerful precedent for excluding today’s forced labourers from our national community. It’s easy to think about those who are blatantly underpaid and abused in our society as ‘foreign’, when we’ve always thought about them that way.

Many suggestions have been raised to tackle the injustices of low-wage labour in Singapore. Figures from Professor Tommy Koh to The Online Citizen’s commentator, ‘Masked Crusader’, have called for the introduction of either a minimum or living wage which, in Koh’s words, would enable workers – foreign or Singaporean – to “maintain (themselves)…and live with dignity”. While such proposals are commendable, I believe that an improved economic status alone will be insufficient to provide for the acceptance of ‘foreign workers’ as members of the national community. Paying others fairly can only go so far in changing how we see them: we must first change how we see ourselves. By teaching our children to see the low-wage immigrants of the past as an integral part of our national past, we may yet learn to welcome them as equally important stakeholders in our present and future.

Theophilus Kwek reads History and Politics at Merton College, Oxford, where he also serves as President of the Oxford University Poetry Society and a Co-Editor of the Journal of Politics and Constitutional Studies. He is helping to organize the Southeast Asian Studies Symposium and the inaugural Festival of Southeast Asia in Oxford this week.