Home > Immigration > A Case of Renewed Identity: The Fading Role of WWII in Singapore’s National Narrative 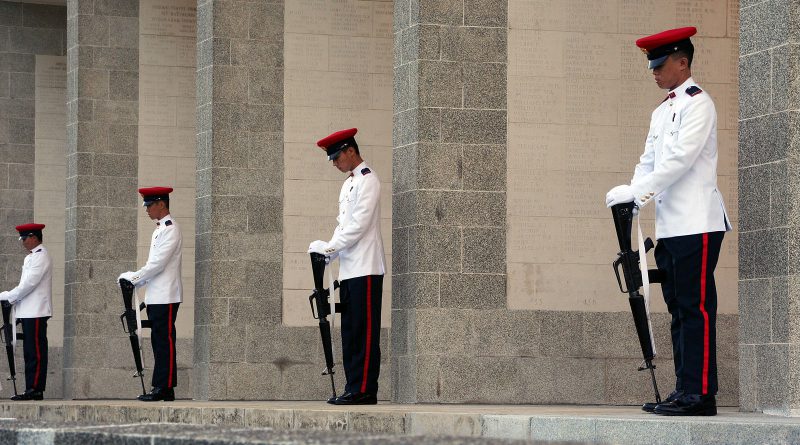 With Singapore in its 50th year of independence, the island’s past has been the focal point of much introspection this year. The National Day Parade dedicated an entire chapter to an artfully choreographed portrayal of the island-state’s history. The celebration and consideration of the country’s history is less inevitable than it may initially seem – until the late 1980s, Singapore looked firmly to the future with little regard for its past. The government’s fear that national identity had suffered as a result of this neglect led to a rejuvenated interest in Singapore’s past. National Education was introduced in 1997, and the story of Singapore’s traumatic war experience was placed in a central role in this ‘Singapore Story’.

This version of the ‘Singapore Story’ is deeply interwoven with Singapore’s defence concerns. Singapore’s abandonment by the British and subsequent occupation by the Japanese during World War II (WWII) is used to emphasize the need for self-reliance and the part that Singaporeans have to play in defending their “Little Red Dot”. Singapore’s concept of “Total Defence” emphasizes the importance of a strong national identity. ‘Being loyal and committed to Singapore’ and ‘having pride in Singapore’ is a key part of psychological defence, whilst racial and religious harmony is integral to social defence. However, the narrative of WWII has weakened as a building block of national identity.

Singapore’s relations with its immediate neighbors, Indonesia and Malaysia, have improved. New threats to Singapore’s security, such as piracy and terrorism, are transnational and demand international cooperation. In a speech given in 2005, the Minister for Law S. Jayakumar said that ‘there is a clear need for bilateral, regional and international cooperation to better manage these threats and concerns’. The military introduced its 3rd Generation Army in 2004, which aims to increase multinational cross-agency cooperation. Joint efforts, such as the Malacca Strait Patrols, a series of trilateral efforts to combat piracy in the Straits of Malacca, exhibit Singapore’s willingness to cooperate with Indonesia and Malaysia. This has made it more challenging for national identity to be constructed on the previous rhetoric of self-reliance.

WWII has further become less relevant to national identity due to the clumsy way that the state has handled war memory. Chinese victimhood is at the centre of war memory, whilst the complexities of the varied experiences amongst minority ethnic groups have received less attention. The annual ceremony at the Civilian War Memorial on Total Defence Day has retained its mainly Chinese character, despite ostensibly being meant for all citizens. This has limited the space for non-Chinese to express their distinctive war memories in public. However, this exclusion has not been acknowledged by the state. Rather the state has attempted to universalize a particular narrative, which has had the effect of whitewashing the emotional intensity of Chinese memories. War memory is simultaneously too Chinese and not Chinese enough – it excludes other ethnic groups, yet does not hold enough emotional appeal vis-à-vis the Chinese population. War memory in Singapore is therefore political rather than emotional. All the respondents interviewed for this paper described the war as being significant due to its political legacy, often echoing the state’s rhetoric. One interviewee for instance, explained why he believed WWII was integral to Singapore: ‘It’s the entire justification for our National Service.’ Unusually, none of the respondents addressed the emotional legacies of the war. The Singaporean treatment of the war has minimized both the individual and communal experience of trauma. This in turn has weakened the war’s contributions to building national identity.

Singapore’s dramatic demographic changes pose a further challenge to its current national identity. There has been a large and sudden increase in immigration over the last few decades. Non-citizens made up 13.9% of the population in 1990, increasing to 36.4% in 2010. The government forecasts that immigration will continue to grow, in order to boost Singapore’s economic productivity. However, in interviews conducted, immigrant respondents indicated that WWII held less resonance for them than for the local population. For one respondent, the fact that ‘the “our ancestors went through this” rhetoric never really hit home’ meant that she failed to feel as connected to this part of Singapore’s history. Singapore’s changing demographic has prevented it from constructing what Benedict Anderson termed ‘ghostly imaginings’, whereby the living generations feel their connection with the dead who belong to the ‘same’ national community. This threatens the state’s imagined continuity and transcendence of time. One respondent stated that ‘the influx of foreigners…have [sic] skewered [his] opinion of the “Singapore story”, causing him to feel distant from the “Singapore story”.

In order to create a more inclusive national identity, the state has placed greater emphasis on the efforts of minority resistance groups during the war. Opened in 2002, Reflections at Bukit Chandu, an exhibition on the history of WWII in Malaya managed by the National Archives of Singapore, was the realization of a long-held public, and particularly Malay, interest in recognizing the sacrifices of the Malay Regiment. Despite these developments, the state remains wary of ethnic loyalties competing with nationalism. In a speech at a Malay community function in 2002, then Minister George Yeo expressed his consternation at being told that ‘the museum has become a cultural shrine to many Malay Singaporeans. Lieutenant Adnan and the men of C Company sacrificed themselves not for the Malay race…[like] volunteers of other races who fought the Japanese…these Malay heroes helped to create modern Singapore.’ Whilst minority groups have received a greater role in the narrative, the state remains primarily concerned with channelling sentiment toward the bolstering of national identity.

The state has attempted to localize war sites, by emphasizing the roles that Singaporeans played at these sites. Additions have been made to the World War II Trail since 2012 to include sites that reflect the local experience. Apart from Reflections at Bukit Chandu, these include the Singapore Volunteer Corps Headquarters and the Lim Bo Seng memorial. These changes are meant to highlight local involvement in protecting Singapore. This differs from the local sites included prior to 2012, which solely focused on Singaporeans as victims of the Sook Ching massacre. However, this has failed to erase the fundamentally foreign nature of these sites. Interviewees were apathetic when asked about their compulsory school excursions to these sites. Many did not remember much about the sites. One respondent said that ‘it’s more of a sightseeing thing than anything else’, whilst another described it as ‘largely useless.’ He went on to explain that ‘this was largely because the events of WWII are so distanced from us that the sight of a [sic] old, rusted cannon doesn’t really stir up many feelings.’

Back to the Past

Singapore is looking further into its past to build a stronger national identity. The secondary school curriculum was expanded in January 2014 to include pre-colonial history dating from 1300, when established settlement was first documented on the island. Associate Professor of Humanities Derek Heng of Yale-NUS College, who authored Singapore: A Seven-Hundred Year History and contributed to these curriculum changes, has described the influx of migration as a stimulus for reassessing its history: ‘If inward migration continues, we need to know who we are or we will get lost…Now is a good time…There’s a need to develop a collective social memory. It’s become a political issue.’ Adjunct Associate Professor (Honorary) Kwa Chong Guan of the National University of Singapore (NUS), who advised on the textbook revisions, argues that ‘the rewriting of Singapore’s history will help citizens accept the expansion in population, and become more inclusive.’ The new textbook, Singapore: The Making of A Nation-State, 1300-1975, brings attention to the period from 1300 to 1600, a ‘golden age…when Singapore was a thriving multinational trading hub’. This is particularly notable as modern Singapore is a nation of relatively recent immigrants, with the bulk of immigration occurring during and after the colonial period. Unlike the experiences of WWII, few Singaporeans have ancestral ties to this earlier narrative. This indicates a new approach to building a national identity that is based on place, rather than on human agency. If this is successful, it will transcend ethnic group and ancestral ties, and form a more inclusive narrative. This is an attempt to create a sense of what Benedict Anderson described as an ‘immemorial past’, one that goes beyond the British colonial legacy. By constructing a longer and more multidimensional national narrative that moves far beyond WWII, the state is attempting to build a more concrete national identity.

In all the obituaries and commentaries following Lee Kuan Yew’s death, one particular trait has always received mention: his ruthless pragmatism. This has been his legacy to the island-state, and continues to be Singapore’s main guiding principle. War memory was adopted in the early 1990s as a pragmatic measure aimed at ensuring Singapore’s continued survival. In the new millennium, as its external geopolitical circumstances change and its population becomes more foreign, WWII has grown increasing irrelevant to the Singaporean narrative. The same pragmatism that bred war commemoration has and will continue to engender its fading relevance to public policy.

Amaris Lee graduated from Trinity College, Oxford in 2015, with a degree in History and Politics.